To the community and faculty of The Mandelstam School:

The Mandelstam School’s generous grant for our international tour of Electra proved to be a vital financial gain that allowed our Harvard student production to exceed all expectations of quality and professionalism. The majority of the grant contributed to our travel budget, which was more than necessary since the tour stopped in Istanbul, London, and Berlin. Without the generous grant from TMS, we would have been unable to afford proper transportation.

On the first leg of our tour, we relied on our native Turkish-speaking actors to translate for our lighting and sound designers and Kadköy Boa Sahne’s resident staff in order to put on the highest quality production. The executive team decided that a vital scene in which Electra explains, effectively, the whole plot of the show to her sister, would be performed in Turkish. This allowed even the non-English speaking audience members to become even more immersed in the production.

On the second leg of our tour in the Etcetera Theatre, TMS will be pleased to learn that the production was given a 5-star review by London’s Pub Theatre magazine, and was nominated for the magazine’s Standing Ovation award! A small portion of the grant was dedicated to purchasing hardware such that our set could be constructed prior to each performance and deconstructed immediately afterwards, as there were other performances immediately after ours every night.

Finally, in Berlin, we used another portion of TMS’s grant hired a locally famous actor to substitute for another actor who was unable to attend. This drew the attention of hundreds, and all three of our final performances at English Theatre Berlin were completely sold out.

Overall, the tour was a resounding success, and we sincerely thank you for your contribution towards making it possible. 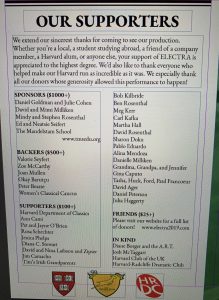